There exist a number of fairly well-known and invariably poorly reproduced - if not to say incorrectly captioned- photos of the Messerschmitt Bf 109 G-10s of 5./NJG 11 which were extensively photographed by RAF personnel at Faßberg during May 1945. Below are two such examples ( in this instance saved on Marc-André Haldimann's Flickr pages, highly recommended for Bf 109 images..) 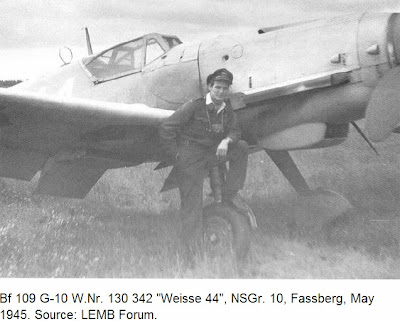 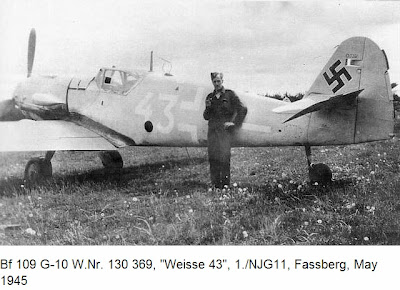 Courtesy of  Luftwaffe author and researcher Jean-Yves Lorant I am able to post two exceptionally good quality images of "White 43" WNr. 130369. Click on the images to enjoy a full-screen view. Finished in an overall light blue-grey 76 Hellblau "White 43" wears a colour scheme that was typical for the 'Mosquito hunters' of 5./NJG 11 during 1945.  Even at distance in the darkness aircraft wearing dark camouflage finishes could be quite easily spotted, especially at high altitude. Note the airframe has been polished for an extra turn of speed. Also of interest is the small sliding ventilation panel on the cockpit glazing. The last anti-Moskito sorties were flown during March 1945 and the handful of machines and pilots of the so-called "Kommando Faßberg" flew night ground attack sorties against Allied road convoys throughout the month of April 1945 right up to the arrival of British forces on the airfield. (Photo credits : Jean-Yves Lorant Collection)