Been a while since I last saw this image on ebay.de but it is currently on offer here 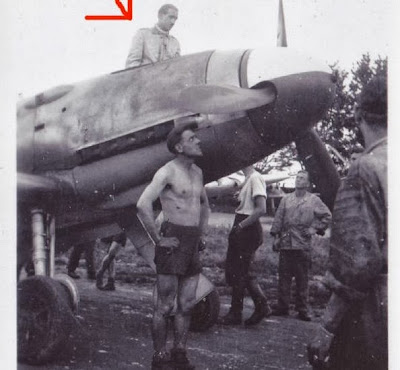 Forward fuselage of one of Galland's 'custom' Bf 109 Friedrichs with the cowl MG 17s replaced with two 13mm MG 131 machine guns - the 'bulge' aft of the cowl gun trough is to accomodate the breech of the up-gunned MGs with the cartridges being ejected sideways.

Galland's 'other' Friedrich 'special' featuring a pair of MG FF in the wings (as per an Emil) is covered on this blog here
http://falkeeins.blogspot.co.uk/2012/04/der-reichsmarschall-bei-oberst-galland.html 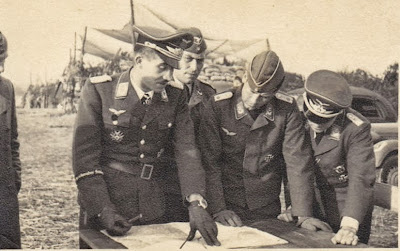 Einsatzbesprechung (pre-sortie briefing) with the Gruppenkommandeur of III./JG 26 Major Adolf Galland (links/left) some time during August 1940. Second from the right is Oblt. Gerhard Schöpfel, Staffelkapitän of 9./JG 26 at the time this image was captured, awarded the RK on 11 September 1940. Schöpfel survived the war with some 45 Luftsiege.
Posted by FalkeEins at 12:01