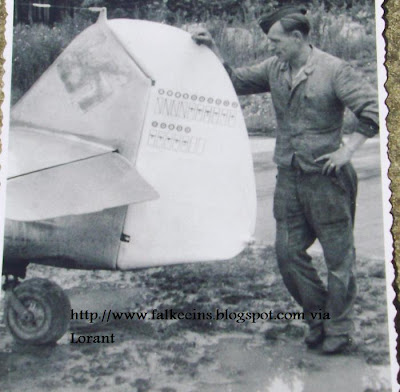 Judging by the number of models posted on hyperscale and elsewhere, Kurt Gabler's Bf 109 G-6/R3 is a bit of a hit with modellers. Usually described as having a 'unique bare metal' finish Gabler's "Red 8" of 8./JG300 is invariably depicted as an uncamouflaged metal machine, aside from a white tail and wingtips, red fuselage band, spinner spiral and decorated rudder.

(Click on the images for a clearer and larger image taken from a quality reproduction from the original negatives courtesy of Jean-Yves Lorant, author of the two volume history of JG 300. And if you have arrived here from Google after searching for JG 300 you can access all my JG 300 posts here)


First off jg300.de got it wrong when it came to this machine, as the webmaster Burkhardt Otto so often gets its wrong when dealing with photos obtained third or fourth hand. In case you're wondering what I'm talking about the jg300.de site STILL captions these images as being of 'black 8' assigned to Rudi Winter - despite the rudder scoreboard. And this despite the fact that Winter was KIA in action in August 1944 with just a handful of claims to his credit. (2 I think..), despite the fact that -unlike Jean-Yves Lorant -he never actually met or corresponded with Gabler!

Kurt Gabler was a wilde Sau ace and achieved some 17 victories as per the rudder tally on this machine returned in only 23 combat sorties as recorded in his flight log. A couple of pages from Gabler's logbook were in actual fact reproduced in Volume II of the JG 300 history (Lorant/Goyat) in order to "assist" the webmaster of jg300.de correct the information on his pages. I assume he hasn't updated those pages as he doesn't speak/read English particularly well. Or he is just an idiot...

As for the supposedly 'bare-metal' finish on Kurt Gabler's 'red 8', let us just say that extensive areas of the airframe have been sanded back either to the natural metal or the primer. However 'bare metal' is probably not the right phrase to describe this finish - this was a standard camouflaged machine with a 'stripped-down' (sanded) finish for an extra turn of speed - there are still large areas of paint over the airframe ! Exactly how much is difficult to say looking at the photos - certainly the wing roots and even the leading edges of the (starboard) wing appear to have paint on them. Gabler never actually stated that his machine had been stripped back to the metal, nor do the authors of the JG300 book - I believe that this was merely an assumption from the publisher/profile artist (Tullis) based on the photos - obviously a great 'subject' for a decal sheet and it certainly makes for a striking looking model! For what its worth, there is another interpretation altogether in the French edition of Lorant's JG 300 book illustrated by Claes Sundin which shows the aircraft in a primer-type finish, far from the shiny, glittering metal that most modellers love to portray this aircraft in. (See link below) Note the close-up of the tail and rudder in the photo above - if that is 'metallic' then it has a rather dull 'alloy' look to it - it doesn't appear to be 'shiny' metal. A handful of machines like this with a 'sanded-down' finish were deployed by JG 300 principally in an effort to try and catch RAF Mosquitoes, a type that the Jagdwaffe found almost impossible to shoot down. Gabler got one in June 1944, a downing he describes in the book... 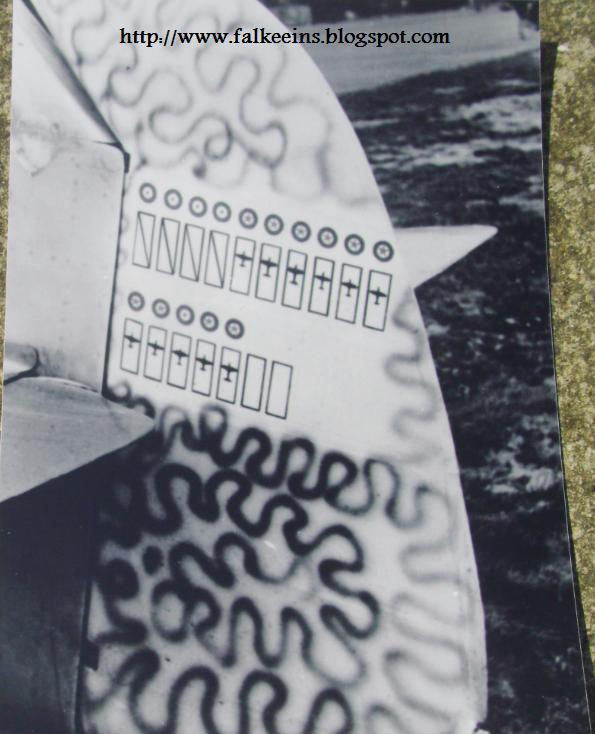 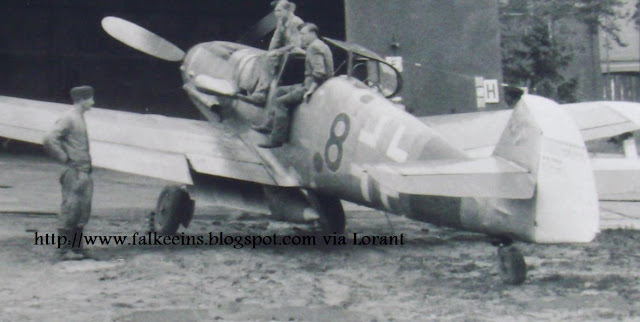 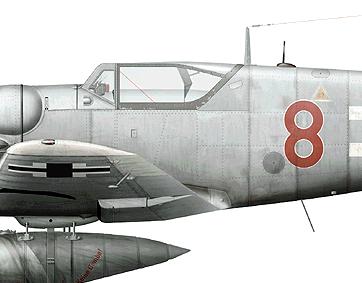