The following is a translation of an article - with some additional material - that appeared in the late 70s in the French magazine 'Le Fana de L'Aviation' written by 'Le Fana' staff writer Jean-Yves Lorant. Translation copyright retained. ..

The De Havilland 98 Mosquito - of wooden construction and aerodynamically pure lines - was the scourge of the Luftwaffe fighter force during the last two years of the war. Powered by two Rolls Royce Merlins, capable of out-running the latest Luftwaffe fighters and hauling a bomb load of 1,800 kg - even a lone Mosquito could send entire city populations to the air raid shelters and proved a real thorn in the night defences of the Reich. From the summer of 1943 special units were formed to combat the Mosquito menace - Hermann Graf's JGr. 50 enjoyed a spectacular lack of success against the fast British twins. The Wilde Sau units, JG 300, 301, and JG 302 claimed no more than a dozen Mosquitos shot down during the first half of 1944 - but then these specialist night-fighters were largely turned over to the day fighter role during May 1944 under the pressure of the US Air force bombing offensive. Luftwaffe commanders were to place their hopes in the formation of a specialist anti-Moskito night fighting unit during the summer of 1944 - NJG 11 flying the latest high-altitude and high speed models of the Bf 109. On paper at least, these G-14/AS and G-10 variants possessed a turn of speed which enabled them to catch a Mosquito - provided they were loitering at high altitude along one of the many 'corridors' through which the Mosquitos penetrated German air space. We recently met and interviewed two former NJG 11 pilots. Their accounts shed new light on this little-known aspect of the night air battles over the Reich ...

Feldwebel Fritz Gniffke  ".. I was born on 28 Decmber 1920 in Danzig and spent a year as an instructor at the A/B 9 flying school in Grottkau where I acquired a little night flying experience. In August 1943 I was posted to the wilde Sau night fighter training school at Altenburg where I achieved the three blind flying Scheine -'licences'- qualifying me for night ops on the Fw 190 and Bf 109. It was while I was undergoing this training that I learnt that new single-engine night fighting Staffeln were being set up and that recruits were being sought from the ranks of flying instructors and other experienced airmen. On 10 September 1943 I received my first operational posting - to 6. Staffel JG 302 stationed in Husum. There we were told that being able to pinpoint English bombers over cities on fire didn't require any super human qualities - their silhouettes were readily visible and in any event the searchlight batteries would assist us. On clear nights lighting conditions were similar to those that might be encountered by day. I'm afraid all this left me rather sceptical. On 23 September 1943 I was airborne at 21:53 for my first combat mission at the controls of Fw 190 A-4 "Yellow 9" - as luck would have it the sortie proved to be a complete fiasco.. The controllers ordered us to orbit for thirty minutes but when the call came through for all 'wilde Sau' to proceed to Mannheim - the actual objective of the British bombers - I was much too far to the south. By the time I arrived over the city I could see several fires blazing on the ground while the searchlights continued to sweep the skies - but there was no sign of any English bombers...in the end I managed to put down at Lippstadt at 23:03 after narrowly avoiding a collision with a Bf 110 in the circuit..my knees were trembling as I climbed down from the cockpit and made my way over to the control room to find a telephone and report that I had landed safely. It was pouring with rain.."  (to be continued) 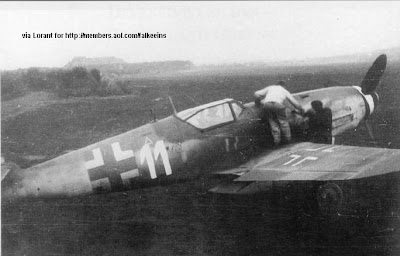 This image has appeared in a number of books (eg Brett Green's 'Augsburgs Last Eagles' by Eagle Editions) - but is not always correctly captioned. 'White 11' of I./NJG 11 was regularly flown by Fw. Fritz Gniffke and this scan is via Lorant/Gniffke. The aircraft is a G-10 with Erla canopy and exhaust flame dampers, rare for a G-10. The pilot head armour appears to have been retained which in itself was also unusual for a 109 Moskito hunter. Camouflage was the standard grey scheme. Gniffke flew sorties in this aircraft up until 14 January 1945 - picture was taken on 27 September 1944 at Bonn Hangelar. 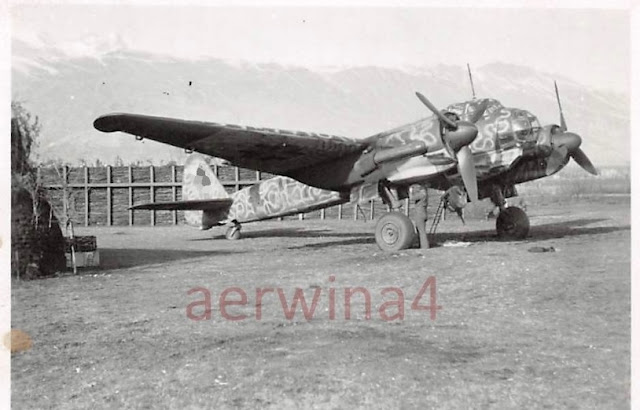