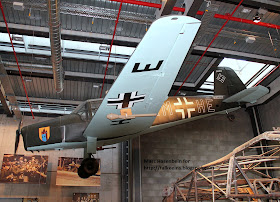 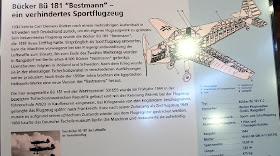 Above; Bücker Bü 181 'Bestmann' WNr 501659 was built in Czechoslovakia in early 1944 and served at the FFS A/B 23 in Kaufbeuren with the Kennung RM+HE where it was converted to mount Panzerfaust bazookas in the final weeks of the war. Today it is exhibited at the Deutsche Technik Museum in Berlin. Photo courtesy Marc Hasenbein.

Below; first published in the Modell Magazin issue of 3/83 this was for a long time the only known photo of a fully-armed Panzerfaust-toting Bücker Bü 181 'Bestmann' seen here undergoing trials with the Panzerfaust Versuchskommando (test detachment) at Trebbin on 01 April 1945. 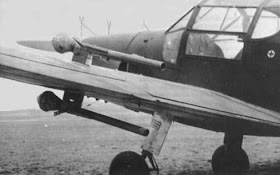 Of course in his inimitable style – his Nachtschlacht book featured well over a 1,000 footnotes - author Möller then provides a footnote detailing a lengthy list of references which prove if anything that there has, on the contrary, been a decent amount of (mostly German-language) coverage, including magazine and web articles, devoted to the late-war combat role of the Bücker Bü 181. I will be covering a few of these over the course of some forthcoming blog posts. 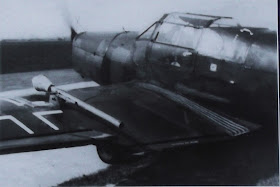 Of course I'm being a little unfair to Christian and  I guess the point is nonetheless worth making again for those Luftwaffe 'enthusiasts' who cannot see past the jets and other so-called Wunderwaffen; the reality of late-war collapse was that for every single advanced jet fighter or bomber being put into service by March/April 1945, the Luftwaffe in its death throes was hurriedly deploying antiquated biplanes or obsolescent ab initio type trainers in a combat role- either night ground attack Nachtschlächter or 'tank-hunting' Panzerknacker. With training schools closed and the Luftwaffe starved of fuel - these types did not demand much in the way of piloting skills or even require much gasolene - Bückers and Arados were thus hastily formed into a host of Kommandos and “attack” Staffeln in the forlorn hope of being able to continue the fight to the bitter end. Inexperienced ex-instructors were being ordered to launch perilous early-morning or late-evening ground attack missions against Allied supply columns or tank spearheads with the most derisory of means - the Bü 181 Schulflugzeug (trainer) mounting Panzerfauste rocket launchers on and under the wings. These Panzerfauste bomb-toting Bückers – aerobatic-capable, low-wing, unarmoured monoplanes- were barely able to manage 150 km/h and featured side-by-side seating and dual control columns. It was even planned to re-equip the III. Gruppe of the famed Junkers Ju 87-equipped Schlachtgeschwader 2 with these machines.


In a last-ditch attempt to stem the flow of Allied armour pouring into southern Germany 3. Panzerjagdstaffel was just one such ad-hoc tank-hunting Staffel deployed in the Panzerbekämpfung (tank hunting) role from mid-April 1945 - it was planned to establish some fourteen similar anti-tank units comprising twelve aircraft and some twenty pilots with the units divided between east and western fronts. Established at Kaufbeuren in early March 1945, the Bü 181 trainers of 3. Panzerjagdstaffel were crewed (pilot/observer) by qualified flying instructors from Flugschule A/B 23 under Staffelsfuehrer Oberleutnant Karl-Heinz Dragenscheck. Some details of this unit's exploits - one of the few to actually see service - were given in an issue of Flugzeug classic magazine during 2006. Boring in at low level at barely 150 kph, the intrepid pilots had trained to close to within 500 m of enemy tanks before pulling up to around 20-30 metres altitude and then diving on their targets, unleashing the rockets at a distance of only some 100 metres before banking sharply away in order to escape the blast wave from the exploding rocket. To nullify Allied air supremacy, sorties were to be flown at the crack of dawn or as darkness was falling.

Airborne from Ringingen six Bü 181s of 3. Panzerjagdstaffel (tank hunting squadron) underwent their baptism of fire against Allied armour at 20h20 in the vicinity of Tübingen on 19 April 1945. Although the crews (pilot and navigator) failed to locate any tanks, a number of Allied trucks were destroyed. The sortie was repeated on the following day. 3. Panzerjagdstaffel flew what was probably their last sortie of the war at dawn on the 24th. In this instance the targets were not even Allied tanks but abandoned German aircraft left on the field at Memmingen. After this the unit fell back via a number of different airfields to the Bavarian Alps before the personnel surrendered to the Americans at Reit im Winkl on 9 May 1945.... As can be seen in the photo (bottom) the Panzerfaust rockets were fired by means of Bowden cables laid across the wings from the cockpit and the engine cowl mounted a crude aiming device. In practise the upper wing mounted rockets were only rarely fitted - the exhaust gases at launch had a tendency to set the wooden wing surfaces on fire!
Prior to the unit's first sortie there was an event of some note - one of the unit's Bü 181 was stolen by two defectors - former flying instructors Unteroffiziere Hans Ficker and Werner Diermeyer. The two 24-year old officers appropriated one of the light trainers at dawn on 19 April 45 and flew off to Switzerland at the controls of the machine illustrated. Ficker had lost his brother during the Battle of Britain and had himself been badly injured in a crash during October 1944. By January 1945 the lack of fuel for training had effectively ended the careers of the two flying instructors, both now likely candidates to be re-mustered as infantry or as flak crews. Dying a heroes' death for Volk und Vaterland in some muddy trench was not for Unteroffizier Diermeyer. Diermeyer had at one point been offered a chance to re-train on the Me 262 but in the chaos of the last months of the war nothing had come of this. At some stage during the story Diermayer had got wind of the aerial activities taking place at Kaufbeuren. So instead of reporting to barracks in Hoersching, Ostmark (Austria) for infantry service, Diermayer made his way to Munich where he met up with Ficker. The two men carefully prepared their flight and on the evening of 18 April 1945 made their way out to the airfield. Luck was on their side. Training for the first anti-tank missions had just been completed and the following day the tank hunting Bü 181s were to fly their first combat sorties. At that moment an air-raid alarm sent everyone to the bunkers and the two men were able to enter a hangar where the Bü 181 assigned to the Staffelkapitän of 3. PzJgSt was being serviced. Ficker managed to get the engine started, taxiied out onto the field and quickly getting airborne the two men headed for Bregrenz and the Swiss border, touching down at Duebendorf some ninety minutes later. Post war this particular machine served - along with five others - in the Swiss Air Force before being retired in the mid-fifties. 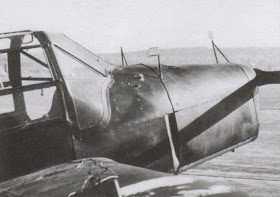