some 'new' text from a 17-page letter written by Arnold Döring.

"..I was assigned an old 'puffer', a really tired old ship, which I was only able to trim properly after several hours at the controls. "Red 6" had already had a long life and seen a lot!.. Etliche Bruch- und drei Bauchlandungen stehen in der Lebenslaufakte verzeichnet.. Several crash landings and three belly landings were recorded on the maintenance log. Most recently 'red 6' had been flown by the former Staffelkapitän of 2.Staffel until he crashed at night in bad weather at the controls of another aircraft - he smashed into a rock face in the Harz. And he was a former Lufthansa pilot with more than 2 million flight kms under his belt. The TO told me to go easy with 'red 6' but even so the machine would not have a much longer life. By a full moon I was finally able to complete the night takeoffs that I had not been able to make and then, by late September, I was finally 'einsatzbereit' - ready to fly my first wilde Sau sortie. I was itching to give Tommy a run for his money..." 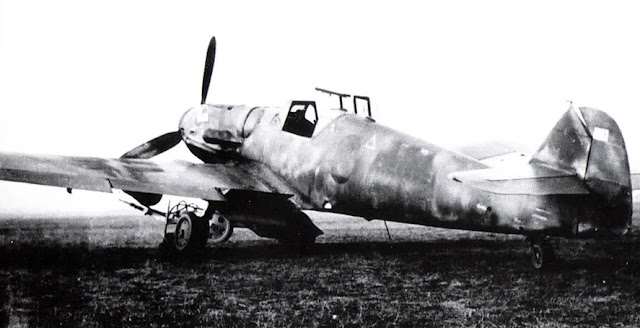 Döring was one of the most prominent wilde Sau pilots and achieved seven kills with I./JG 300. Pictures of 'red 6' from the Lorant/Goyat history of JG 300 have been widely posted.
Posted by FalkeEins at 13:17