Heinkel He 219 night fighters due to be delivered during April 1945? 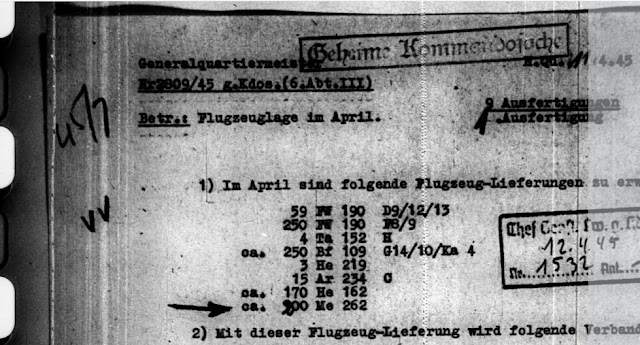 Generalquartermeister document concerning GAF aircraft deliveries 'Flugzeug Lieferungen' expected during April 1945 - note fifth item from the top, " 3 He 219 ".
According to many accounts, including Thomas Newdick's new compendium of German WW II aircraft, the approximate  cancellation date for the He 219 was May 1944.  The RLM's 'cancellation' of further development of the type - apparently due to the Reich's difficult raw materials situation and political maneuvering by Junkers- was the result of  Goering's decision of 25 May 1944 to favour development of the Ju 388. However the Reichmarschall's decision to cancel the He 219 was quickly 'reversed' on 13 June 1944, perhaps unsurprisingly given the type's success in combat with front-line units. Milch noted at the time;
"..with a truly first-class machine as the He 219 [Von Lossberg..] cannot understand how this bird in the hand can be lost for two in the bush - namely the Ta 154 (which is worse in every respect) and the Ju 88 G which is slower than the He 219 by some 40 km/h.."
There followed Ernst Heinkel's lengthy memorandum of 15 June 1944 outlining the type's superior characteristics and promising output of 50 machines per month. This memorandum is covered in full on pp.33-35 of Ron Ferguson's He 219 book. However with series production of the He 219 A-2 underway during the summer of 1944 at Schwechat, events in the daylight defence of the Reich came to over-shadow the He 219. A new project had assumed much higher priority - the He 162. Accordingly only 10 He 219s were delivered in the last quarter of 1944. The He 219 Lieferplan 227/1 calling for 50 He 219s per month was definitely over-turned in late January 1945 with only current production orders to be fulfilled. The Führer Emergency Programme decreed that development and production of propeller-driven nightfighters including the Do 335 was to end.
So the April 1945 delivery of 3 He 219s is a reasonably good fit with the data on p.40 of the He 219 book (near top of page - item (c)).
And a note from Ron Ferguson;
" Please note that Table F on page 39 of my He 219 book has been updated to include a 7th build block (Bauausfuhrung 7 B.A.). I'm sorry it was not originally included in the book, but this was very much a grey area at the time of publication. The attached supplement gives details of the changes which, as you'll see, affect only the last four A-0 pre-production machines from Schwechat assembly..." 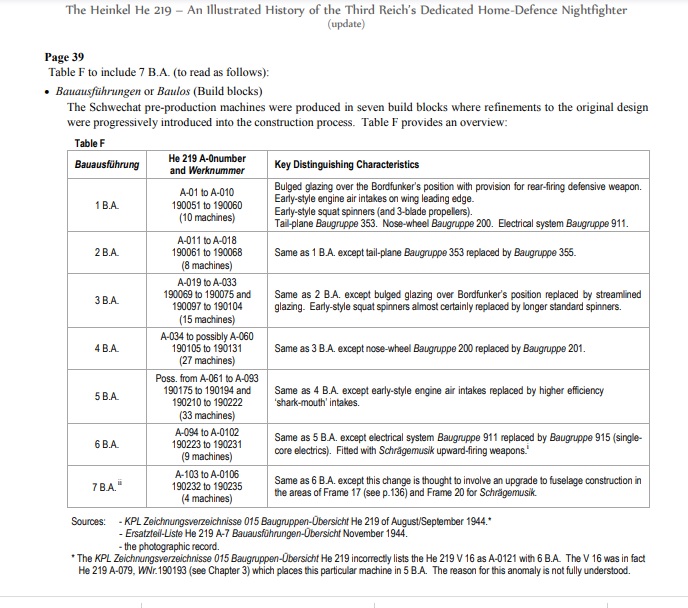 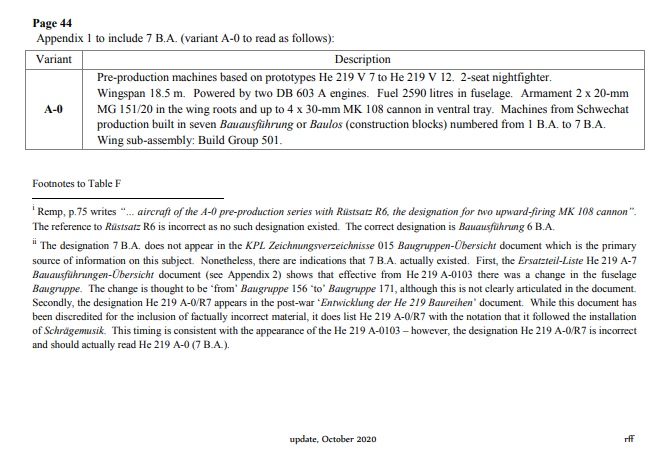 "Heinkel He 219: An Illustrated History of the Third Reich’s Dedicated Home-Defence Nightfighter" by Ron Ferguson is distributed exclusively by Wing Leader.
Sample pages at their website here
Posted by FalkeEins at 11:06