Walter Oesau's Fw 190 A-5 'green 13' WNr. 1230 displaying the five 'stylised' Viermot silhouettes on the yellow rudder representing both the increasing numbers of US four-engine bombers appearing in the skies of France and the Kommodore JG 2 Oesau's victory claims following his 'grounding'  or Startverbot after achieving 100 victories. His '5th' was returned on 29 May 1943 during an 8th AF raid on the Brittany U-Boat bases, a B-17 HSS Herausschuss or shooting-out (an enemy aircraft separated from the protection of its formation) which Egon Mayer then claimed as an e.V. endgültige Vernichtung or 'final destruction'. Note the normal Stab and command chevrons had been replaced in JG 2 with two-figure numbers at the same time Oesau's Startverbot was promulgated. This machine was scrapped following extensive damage as a result of an emergency landing by 3./JG 2 Staka Lt. Jakob Schmitt near Lisieux on 25 July 1943. In the image Oesau himself is seen on the wing as the aircraft is being serviced in a 'box' on the field at Beaumont-le-Roger. 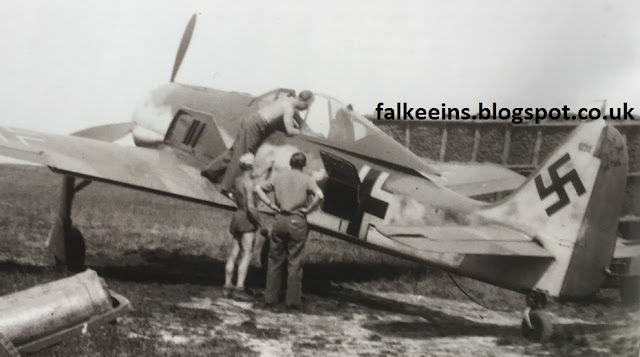 While there are several views of this machine in Peter Rodeike's 'Jagdflugzeug 190' none show the unusual rudder 'victory' markings. This image first appeared in the Lorant/Frappé classic "Le Focke Wulf 190" and also appears in Erik Mombeeck's 'Dans le Ciel de France' Volume 3 (1943). It has been republished in the latest issue of Many Souffan's Aces magazine (Heimdal). Many has compiled an excellent biography of Oesau over forty pages (inc. six-page modelling section), a notable 'first' - also of note in the article is a full-page A-4 photo of Oesau climbing out of what is presumably a III./JG 3 Emil displaying a 'double chevron' with a highly unusual additional single bar aligned in parallel above it!

With this issue the cover price has been increased by 1 Euro for sixteen additional pages. Contributors to this issue include Jan Bobek, J-B Frappé, J-Y Lorant, Erik Mombeeck and Arnaud Prudhomme (a superb feature on P-38/P-51 and F-4 ace Robin Olds). Profile artist is Vincent Dhorne. Recommended. 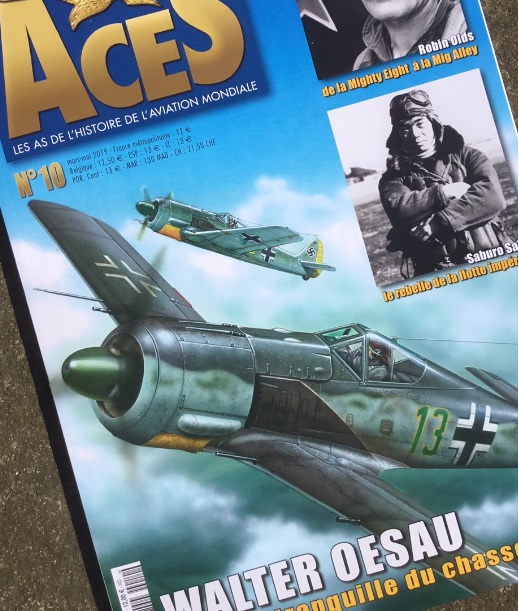