As a 'blogger' of ebay photo rarities I will obviously have to say something about the following, without, hopefully, wading too far into the debate, which I have kept well out of until the photo has been carefully scrutinised. Which it now has been. And to say that if Jean-Yves Lorant indicates that the photo is 'genuine' than that is usually good enough for me. The sceptics on the various forums got in first with their arguments about manipulation, distortion, perspective etc etc. Nothing wrong with a healthy dose of scepticism but these same sceptics are not usually 'photo specialists'. Sorry guys. And neither am I. But I know somebody who is!

" It is undoubtedly a fake in my opinion..."

" It is obviously a fraud which succeeded to fetch a large amount of money. The buyer should be made aware .."

It strikes me though that any Photoshop manipulation however professional could be detected under high magnification simply from a close examination - even size comparison - of the pixels ? The 'white arrow' flash on KG 54 training machines is already well known from other sources, although not admittedly in the single-seat variant. 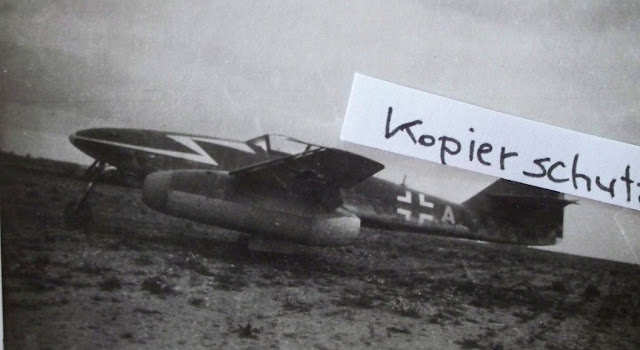 and a response via Jean-Yves Lorant;

" I will keep you informed if/when I have the photo in question in my own hands. I am the official responsible for the 9.5 million private and official photographs of the French Air Force held in the archives at Vincennes castle near Paris. I have been manipulating and reproducing original photos for over forty years and I will know very quickly if it is a counterfeit..."

".. I was able to examine yesterday and scan in high definition the original photo of Me262 A coded " AL.."

...A manipulation by photoshop, even a very successful one will always leave traces and does not resist close examination. And there are two parameters that seem essential to me: the argentic grain of the photo, which seems totally homogeneous on this new photo according to Jean-Yves Lorant and the fact that the paper is suitably 'aged' with manufacturer's stamp. A digital manipulation transferred on a photo paper that has not existed for decades? The close examination of the original photo that Jean-Yves has now carried out failed to detect anything suspicious.

"...The original has many small scratches and imperfections as seen on original German photos of the same period. The picture is not sharp enough to read the Werk Nummer, nor the small 'B3' code of KG 54 that should be painted in front of the fuselage cross. The argentic grain of this print on old paper is perfectly homogeneous. This is obviously a perfectly original print..."


So, yes, this is a very rare and genuine photo of Me 262 A-2 "Anton-Luise" assigned to 3./KG (J) 54 armed with two 30 mm cannon and displaying the letters A (gelb) and L (schwarz) aft of the fuselage Balkenkreuz. It is possible to make out the WNr, but not read it with 100% accuracy.


At the risk of seeming infatuated, I can safely state that there are few 'experts' in this field with as much knowledge of the subject as Jean-Yves Lorant - in his professional life he manages the French Armed Forces photo archive (SHD at Vincennes) - some several millions of images. As he wrote on on one forum, " I am not sure that there are on this forum people who can claim an expertise superior to mine in this domain ".

There are not Jean-Yves, have no fear... Even those that have seen hundreds of war-time Luftwaffe photos, well, their experience is small beer compared to your own!

To close the discussion.  A spectacular price has been paid for this one image - but as someone who has sometimes spent a lot more money on trips to Germany for much less spectacular results put it;

" ..given my age (61), I will certainly never have the opportunity to see others comparable to this one. If anyone knows who is the lucky owner of the other Me 262 photos from the same seller, please send me a message. I thank you in advance..."

Now the internet 'fakers' and 'plunderers' just have to decide what type of Hakenkreuz  - out of the six possibilities - to put on their 'copies'..