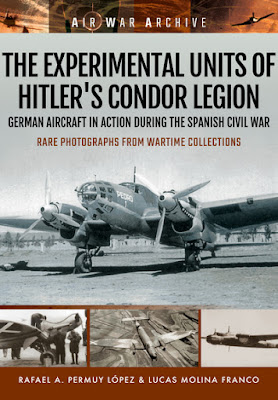 " The Experimental Units of Hitler's Condor Legion: German Aircraft in Action During the Spanish Civil War" is the latest in Frontline books "Air War Archive" series. Written by Rafael A Permuy Lopez and Lucas Molina Franco and translated from the original Spanish this new work features, according to the publisher's blurb, "rare photographs from wartime collections". And to be fair some of them are quite unique. Author Permuy Lopez has already produced several well-received titles on Spanish Civil War aircraft including the 96-page softback "Air war over Spain" produced by Classic, similar in style to this publisher's Jagdwaffe Colours series. Here for Frontline (a Pen and Sword imprint) he concentrates coverage, as the title suggests, on those 'experimental' Luftwaffe types sent to Spain when the Nationalists sought help for their cause from Germany. The Luftwaffe personnel that formed the so-called Condor Legion trialed a number of prototypes and aircraft then undergoing development- VJ/88 had as part of its mission the testing in combat of Germany's new monoplane fighters - the Bf 109 and the He 112 - while VB/88 deployed the Junkers Ju 86, He 111 and the Dornier 17 in combat for the first time. The Do 17 was a state-of-the-art bomber and at the time the 'greatest achievement of the German aeronautical industry', dubbed 'Bacalaos' or 'Codfish' by the Spanish. As the authors point out, while some of these types went on to achieve notoriety during WWII, their combat performance during the Spanish Civil war has at most warranted brief chapters or more usually a cursory overview.  While the first twenty nine pages are devoted primarily to the in-theatre deployment of the Me 109's principal fighter rival, the Heinkel He 112, the bulk of the content (pages 29-92) features the bomber types. And while both are illustrated  the Hs 123 and Ju 87 dive-bombers are not covered in this title.  There is a fair amount of interesting text  - the activities of VJ/88 are illustrated with extracts from He 112 test pilot Oblt. Otto Winterer's diary describing the first operations of the German fighters ('The He 112's operational debut at Tablada'). At one point he writes " We are fighting against two enemies. Firstly, against the Reds; secondly, and more so, against bad leadership " In  'Loss of a Condor Legion Do 17' a German crew is shot down behind enemy lines during the battle of Brunete to be captured and later exchanged. There are brief combat summaries by unit which do presuppose a certain level of knowledge of the conflict - there is for example a single page devoted to "VB/88's operational debut on the southern Front" in log-book note form and a single page headed "VB/88 in the battle of Guadaljara" or "Operations in Santander: the Battle of Brunete" and so forth. There are no maps though. The bulk of the work is the photo content - mostly clear and well-captioned with some images reproduced over the full page with lots of 'Pedros', 'Pablos' and 'Fumos' (or 'Jumos' as the Ju 86s were dubbed). Similar in style to an 'Osprey', the colour profile centre section certainly looks nice. The He 112 prototypes are illustrated in profile - including Oblt. Harro Harder's swastika-bedecked machine, which will be useful for modellers working with the Print Scale  'Aces of the Condor Legion' decal sheet - while the He 111s feature some striking emblems. However there is no colour key so the reader is left to guess - once again - at the upper surface finish of the Bf 109s that saw combat in Spain. To sum up, a title certainly worth adding to the library. 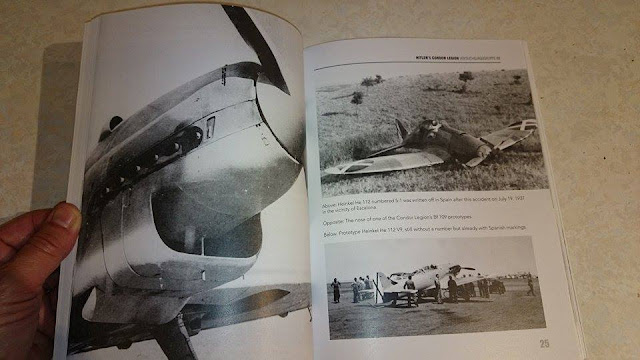 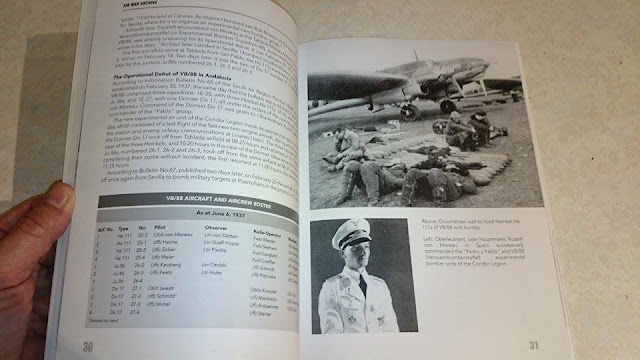