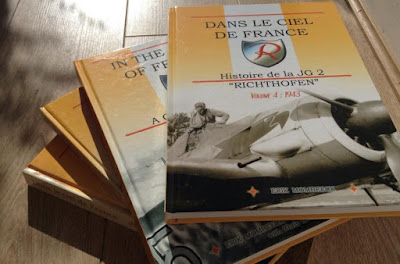 ..four volumes of Erik Mombeeck's self-published history of JG 2...the latest tome in the series covers 1943 and the increasingly ferocious large-scale combats against USAF B-17s over France..

Volume 4 opens with II./ JG 2 still in Africa, while back in France Georg-Peter Eder is appointed Staffelkapitän of the new 'high-altitude' bomber-killer specialists 12./JG 2. On 28 March 1943 a force of over one hundred USAF bombers escorted by some eleven squadrons of Spitfires headed for the marshalling yard at Rouen. Attacking a box of B-17s from the rear and from a slightly higher altitude (6,500 metres) Eder poured his fire into a Fortress flying on the right hand side of the trailing 'box';

"..Suddenly over the radio I heard someone call out, ' the boss has been hit!.' I was unable to respond; thick smoke filled the cockpit. I pulled back the side window to let the air in and caught sight of my badly damaged port wing! My fuselage was glistening with a slick of oil and I was trailing a plume of thick black smoke. Engine revs had dropped back to 1,200. I quickly chopped the throttle and set up to glide back into Beaumont. The smoke in the cabin had meanwhile dissipated but the smell of burning caught in my throat. Flames darted from underneath the engine cowlings. I was now over the western perimeter of the airfield at 500 metres and made the decision to jump while I still could. I unbuckled my harness, jettisoned the canopy and shot a last glance around the cockpit. Just then I saw it...on the floor of the cockpit between my feet, pieces of silk from my parachute. There was no way I could use it now. My chances of baling out had gone...."


Erik has done a fantastic job on these books, I recommend them highly. More info at http://luftwaffe.be

a friend recently messaged me regarding volume 4

"...Hi Neil, I must admit I haven't got volumes 2 and 3 yet. It's quite an investment for something I wasn't sure I'd be able to read. Vol. 4 covers the big raid on Ashford, so I thought it would be worth getting. It's surprising how much of the text I can actually understand. I'll have to save some money for the other two volumes now..."

I'm not of the opinion that language is a barrier to buying or reading these books either. Volume 1 is still
available in English translation, while Vols I & II are also in German. And I'm just blown away by the photos! (again!) - more 2./ JG 2 night-fighters anyone? 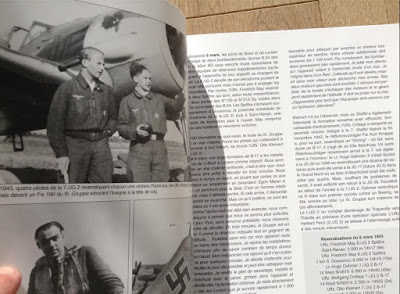 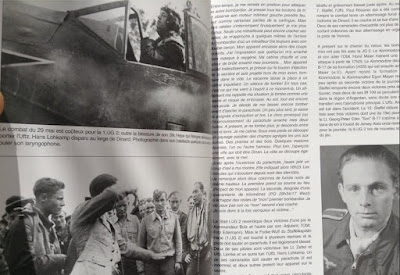 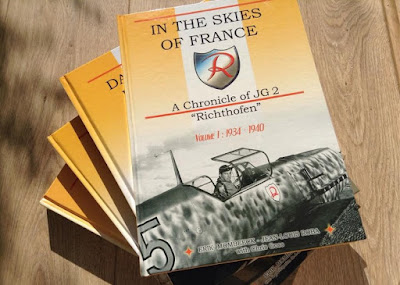