...first in a new series due next month from Lela Presse devoted to "les unites de bombardements allemandes" - German bomber units- is this new title on KG 100 - ' the Viking ship Geschwader '. Written and compiled by Luftwaffe blog friend and noted Belgian air warfare historian Jean-Louis Roba this new tome, at 300 pages and 500+ pictures, promises to be the most comprehensive title yet published on KG 100 - certainly since Ulf Balke's 1981 German-language history (Motorbuch). 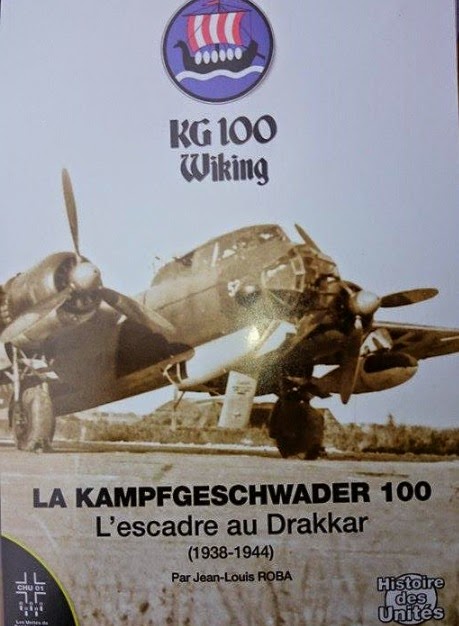 While I've been asked to reveal not much more than " richly illustrated with many previously unpublished images and comprehensive loss and personnel lists..", Jean-Louis' book almost certainly covers early path-finding sorties over the UK during the Blitz, the desperate and last-ditch re-supply effort into Stalingrad, Arado seaplane missions in the Aegean, He 177 ops during the Baby Blitz and more. The work almost certainly features personal accounts from KG 100 crews on Hs 293 stand-off missile launching sorties, for example Klaus Deumling's sinking of the Italian battle ship Roma and details of missions flown against the Allied D-Day invasion fleet also feature. And lots of new He 177 pictures. A must-have!

Klaus Deumling on the sinking of the Roma on this blog
http://falkeeins.blogspot.co.uk/2011/01/klaus-deumling-and-sinking-of-roma-kg.html

Roderich Cescotti on flying the Dornier Do 217 M-11 'the best Luftwaffe bomber of the war' on this blog
http://falkeeins.blogspot.co.uk/2012/04/translated-extract-from-roderich.html

Details of over sixty Luftwaffe book and monograph releases from the past five years of this blog at this link
http://falkeeins.blogspot.co.uk/search/label/Luftwaffe%20books