more on the aces of II.(Sturm)/JG 300, Klaus Bretschneider, Konrad Bauer 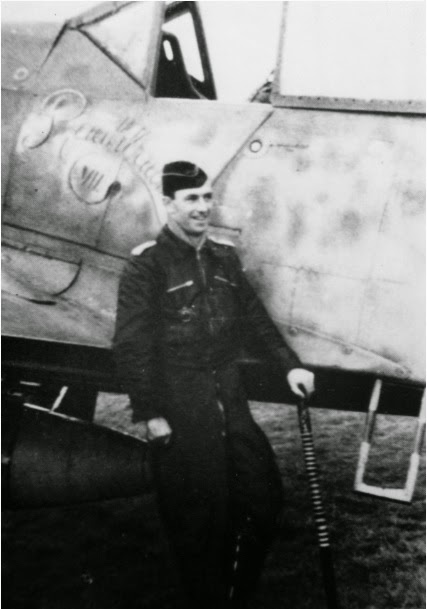 On 24 December 1944 the acting Kommandeur of II.(Sturm)/JG 300, Klaus Bretschneider was shot down and killed by Mustangs. Call sign Specht Anton - Bretschneider- scrambled at the head of JG 300 against an 8th AF raid - was easy prey for the aces of the 357th FG. His Schwarm had been directed right into the path of the aggressively flown P-51 Mustangs. His Sturmbock Fw 190 A-8 (W.Nr. 682204) was  a specialist bomber destroyer variant fitted with cockpit armour and 30mm cannon and entirely unsuited to dogfighting. The hapless German pilot plummeted to earth near Kassel, almost certainly dead at the controls. His loss was a hard blow for his pilots. Klaus Bretschneider flew Wilde Sau sorties with JG 300 in July 1943 with 6. Staffel then 5. Staffel, claiming 14 victories by night. Before being appointed Kapitän of 5. Staffel and serving as acting Kommandeur, Klaus Bretschneider served also in Stab II./JG 300 and Stab/JG 300 and by the time of his death he had claimed 20 additional victories against US aircraft by day. The 'eternal Leutnant' had been promoted to the rank of Oberleutnant and, by late 1944, was a rare Defence of the Reich fighter leader to wear the Knights Cross.

" ..That day our Gruppe was at its usual strength, about thirty combat ready aircraft. Oberleutnant Bretschneider was flying at the head of the formation with his number two, Unteroffizier “Pimpf” Erhardt. We climbed away in a wide sweep to the west. Listening to the exchanges between Bretschneider (“Specht Anton”) and Jagddivision control at Döberitz, I realized that the bomber formations incoming from the west were heading directly towards us. But as we reached an altitude of 6,500 meters we encountered the American fighter cover, several flights of Mustangs, which fell on us with a clear height advantage! At that instant we ought to have employed a tactic that we had rehearsed for just such an eventuality, which involved coming out of our parade-like Sturmgruppe formation and splitting off in separate Schwärme to attack the Americans who at this stage were still outnumbered. But Bretschneider ordered us into a defensive circle, a manoeuvre no doubt dictated by prudence but hardly appropriate in the circumstances! But what else could my comrades do? They were mostly former blind flying instructors or ex-bomber pilots used to flying the Junkers 88 and were barely capable of performing the most basic fighter pilots' moves. They were there to bring down enemy bombers — American escort fighters permitting! There followed an intense and confused mêlée, during the course of which I was more fearful of a collision than enemy aircraft. Indeed there were more Focke-Wulfs than Mustangs around me. I recall catching sight of “Pimpf” Erhardt’s “Red 8” with a P-51 hard on his heels below my plane. I yoked brutally around to port and let myself “fall” in behind the American. My bursts struck home and hit by several shells, the Mustang disappeared from Erhardt’s tail and dropped out of my field of vision. Matthäus Erhardt had not been hit. Unfortunately his period of grace lasted only until the following 14 January, the day his knee took the full force of an explosive round fired by a B-17 gunner. As usual in a scrap involving large numbers of fighters, aircraft wheeled down from 6,000 meters towards the ground maneuvering in all directions. Pilots often found themselves isolated, occasionally in a sector of the sky where no other aircraft — either friend or foe — was to be seen. I saw numerous columns of smoke spiraling up from the ground, marking the crash sites of a similar number of aircraft. The clash had lasted barely ten minutes. Shaken by what I’d just experienced, I set course eastwards, left the combat zone and almost wrenched my neck keeping a watch on my tail. I landed at Löbnitz at 15:40 and was, if I recall correctly, the only 5. Staffel pilot, along with Leutnant Graziadei, to return to our airfield that afternoon. Most of our comrades that had survived had been forced to put down elsewhere and only got back to Löbnitz during the morning of Christmas Day, as at 15:45 on this 24 December day it had already started to get dark. There were many that never came back.."

As usual with JG 300 subjects all text and images via Jean-Yves Lorant (personal account translated by this blog author). You can be sure that anyone writing on JG 300 in print or on the net - especially FB - has borrowed extensively from Jean-Yves... 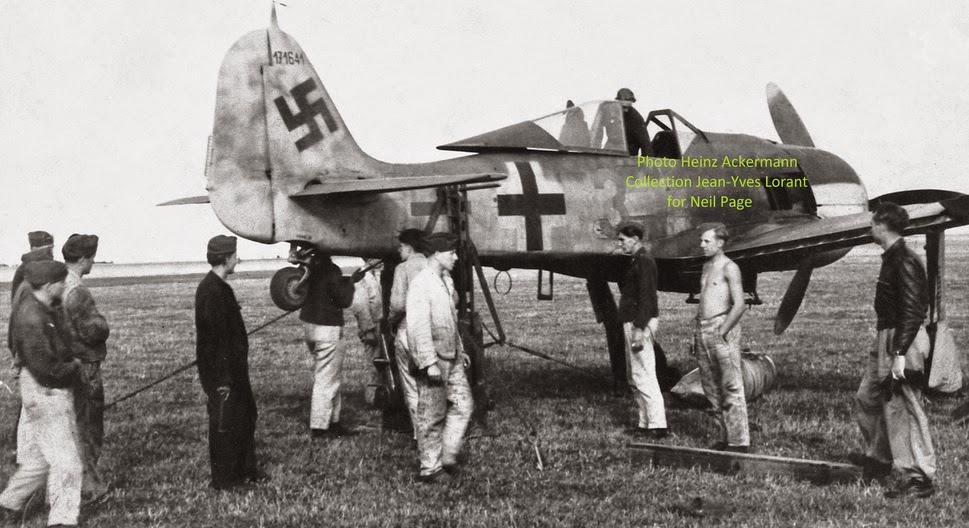 Above, a nice clear view of Fw 190 A-8 'Red 3' Werk Nr. 171641, the usual aircraft of 5. Staffel JG 300 ace Konrad Bauer seen here (right of picture) at Erfurt- Bindersleben during September 1944. The machine is undergoing weapons harmonisation - note the wide open field, cleared of agricultural workers before any firing testing could begin..Note that during September 1944, II./ JG 300 was not yet at Löbnitz. The port side of this machine bore the inscription 'Kornjark'  a 'jokey' reference to the pilot's favourite cognac.

Standing on the wing and operating the firing button is Bauer's erster Wart, Ogfr.Josef Plum. On the far left is Unteroffizier Wilhelm Ladner, a 5 Staffel mechanic. Click on the image to view large..
Posted by FalkeEins at 08:45