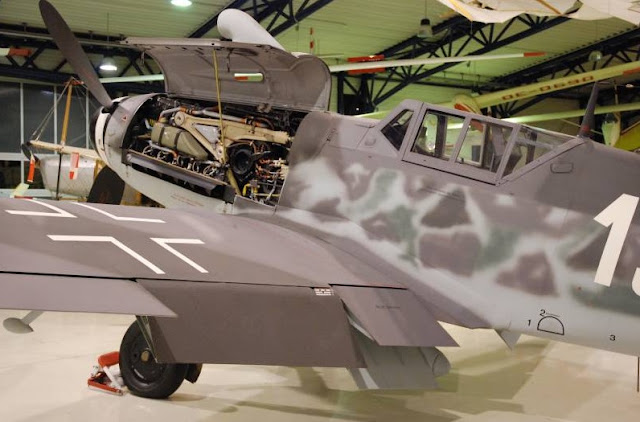 part rebuild, part replica of Herbert Maxis' Bf 109 G-14 'white 13' of IV./ JG 53 (WNr. 784998) photographed at the Aviaticum museum, Wiener Neustadt Ost near Vienna, Austria where it has been on display since 2006 as a "G-6". Photographs courtesy of photographer Ray Barber. Thank you very much Ray!

The original machine -built by Mtt Regensberg- was lost during the Bodenplatte operation of New Years Day 1945 - the pilot managed to get his machine down in one piece in an orchard close to a US anti-aircraft position but was promptly shot dead. Having been stripped by souvenir hunters, the wreckage was later bulldozed into a hole in the ground and dug up during 1987.  This is, I believe, the only Bf 109 in Austria today - in their 2007/02 issue Flugzeug Classic called this exhibit a memorial tribute to the Wiener Neustadt facility which was ultimately responsible for the production of some 8,000 or so of these machines during WW II.

On 1 January 1945, during operation Bodenplatte JG 53 had orders to attack the airfield at Frescaty near Metz. Before reaching the target Uffz. Herbert Maxis took hits from an American anti-aircraft position (the 455th AAA  Bn., 'A' Battery) stationed at Oberfelsberg. Maxis force landed only 200 yards from the American positions and was shot and killed climbing down from the cockpit - "assassiné" as Roba puts it in part IV of his history of JG 53. In some accounts the gun battery crew are reported to have believed the German was going to pull a pistol although he may have been merely pressing his hand against a body wound. Pte Billy Taylor of the 739th FA Bn;

"..the pilot carried out a perfect belly landing. Before I could get to the aircraft the pilot was shot dead and his flight tunic pulled off the body. He was lying in a pool of blood across the port wing root, his arms stretched out over his head. He had thick black hair, looked about 20 years old, perhaps less, and bore a strange resemblance to one of my cousins. He had been shot by one of my friends, Smith, as he was getting out of the aircraft. A grave registration detail took away the body and the next day, officers from HQ came to question Smith - they didn't think much of the fact that a German pilot had been shot in cold blood and left lying in his underwear. There was talk of a courts martial but this idea was quickly abandoned when the brass learnt that the pilot had opened up on us at low altitude with everything he'd got.." 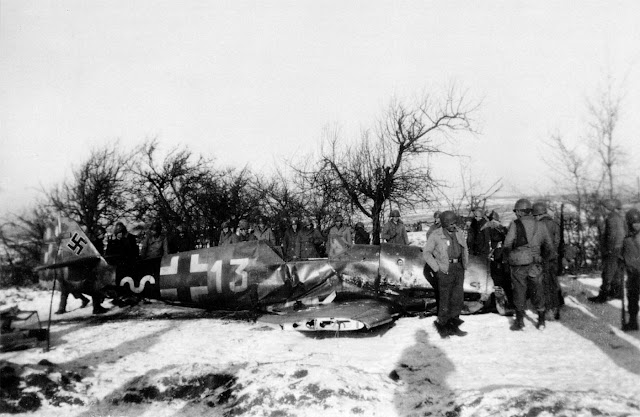 The two images above show that what looks like damage from anti-aircraft fire in the image immediately above (see the caption in Weal's 'Bf 109 Aces') - especially in the fuselage area -seems merely to have been the result of the activities of 'souvenir hunters'. Luftwaffe blog readers may be aware that the cockpit and wing incorporated into the Flugmuseum Aviaticum exhibit are original items from this aircraft - WNr. 784998 (G-14/AS). 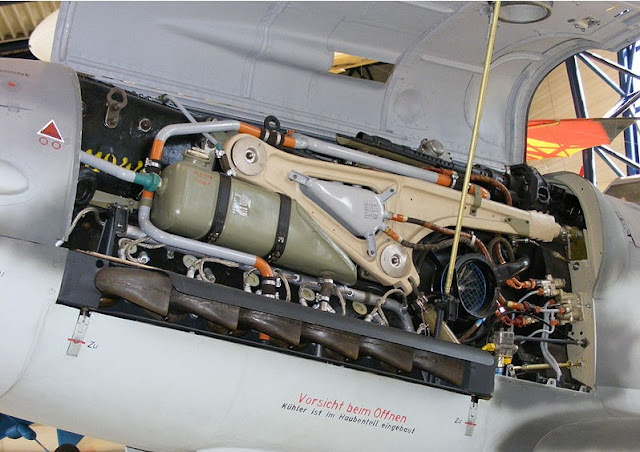