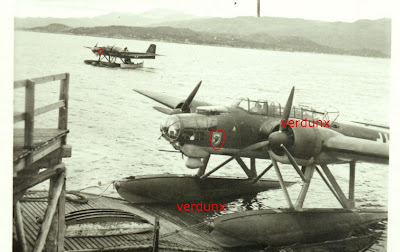 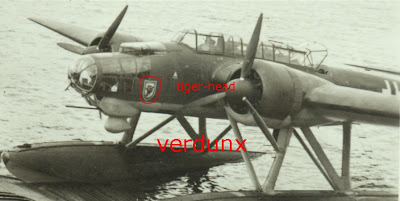 In July 1942  1./406 was one of the last Luftwaffe units still flying the Heinkel He 115. Based in Sörreisa (between Narvik and Tromsö), Hauptmann Herbert Vater, StaKa of 1./406 was tasked on the morning of 2 July with leading a torpedo bombing raid against the ill-fated convoy PQ 17. Each Heinkel was loaded with an F5 torpedo some seven and a half metres long weighing 775 kg, of which 200 was explosive. To launch the weapon the He 115 had to maintain a speed of 180 km/h at an altitude of of forty metres. In theory the torpedo could be dropped up to two kilometres from the target but in practise a more realistic range was barely 800 metres. However at distances such as these the Heinkel pilots were very much aware they would likely find themselves in a maelstrom of defensive fire. One of the 1./406 pilots on this strike was Uffz. Karl 'Konny' Arabin seen below at the controls of his He 115. This is probably He 115 C WNr. 2759 coded K6+IH. Aircraft commander was the observer Oblt-zur-See 'Charly' Burmeister.  Note the rear-view mirror and the sight for the MG 151 cannon. 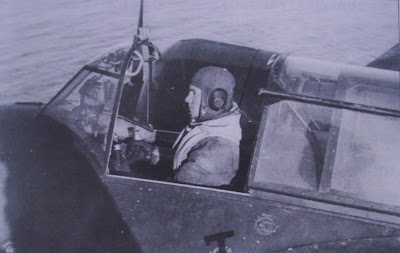 Pilot Arabin recalled post-war that these types of  sorties were particularly testing;

" The convoys were shadowed by a BV 138 floatplane. When ordered in we would often fly four or five sorties with no time for sleep - we took Pervitine and I could stay awake, if not alert, for up to three days and three nights. Our attacks were flown at low altitude before pulling up slightly to launch the 'eel' against the target. Our fish could travel some three kilometres. We sustained heavy losses because once the torpedo was launched  pilots tended to bank away too sharply presenting a good target to anti-aircraft fire. I was a good pilot and rather than attacking from abeam the target would dive down on the prow of a vessel thus presenting the smallest target possible. Even so I got back on a number of occasions with up to one hundred impact strikes on the machine. We also feared ship-borne fighter aircraft - I recall one mission when I had three of them on my tail but we knew they only carried a limited fuel supply. Every time they opened up I managed to evade by side-slipping, the bursts of fire passing off to one one side or over my head. By the time I lost them my shirt was soaked in sweat. On returning from sorties such as this it was as much as I could do to just collapse on my bunk bed.. by then a number of beds would be empty. I lost my best friend  Karl Börger on a sortie  such as this - we had known each other since training school.."

During this attack against convoy  PQ17 Hptm Herbert Vater was forced to ditch in the sea, smoke pouring from an engine.  Burmeister's pilot Karl 'Konny' Arabin elected to put down to rescue Vater and his crew. He later remembered this particular Husarenstück (feat of arms);

" during the attack our Kapitän was hit and managing to retain control of the aircraft put down on the sea. I quickly decided to go in and rescue the crew, against the orders of our observer and aircraft commander Lt. Burmeister. I recall saying to him; ‘I'm the pilot, I'll decide’. Of course I managed to rescue the Kapitän but not before being threatened with  a court martial and things got a bit sticky for me at one point, although I had a friendly meeting with Burmeister again after the war. In my opinion it was our duty to do everything possible to rescue comrades brought down in the sea. Such actions were vital for our morale ". 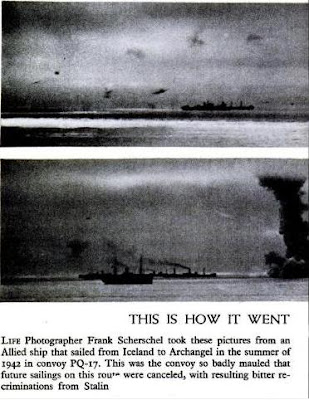 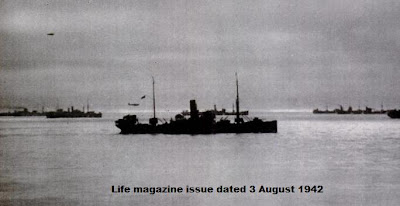