"   Assigned to 1./JG 2, Wurmheller gained 10 victories during May 1942. In June he claimed another 11 victories. His most successful day came during the Allied landings at Dieppe on 19 August 1942. Despite a crash-landing, during which he broke a leg and suffered concussion, Wurmheller claimed seven victories during the day. The feat earned Wurmheller a promotion to the rank of Leutnant and the award of the Eichenlaub (Nr 146), presented on 20 August 1942. His score stood at 60 victories..."

.. seven victories while flying with a broken leg ?  no, not possible surely? But this 'story' is widely repeated on just about any web page you care to look at dealing with Wurmheller, including wikipedia, asisbiz (no surprise there!) and ww2gravestone.com. At historicaviation.com you can even buy a $32 1/30th scale figure of him complete with crutches! While Wurmheller's performance on 19 August 1942 was widely feted for his seven victories, it was achieved with no more serious injury than a foot in plaster (from a previous 'domestic incident') and a bump on the head. The latest volume 3 in Erik Mombeeck's JG 2 history (in collaboration with Jean-Louis Roba) provides more details from a period newspaper report reproduced below. The caption reads,

".... the day of the Dieppe landing. A broken foot in plaster and his first sortie curtailed by an emergency landing during which he sustained slight concussion, then climbing into another aircraft and dispatching seven opponents; that's Oberleutnant Wurmheller..." 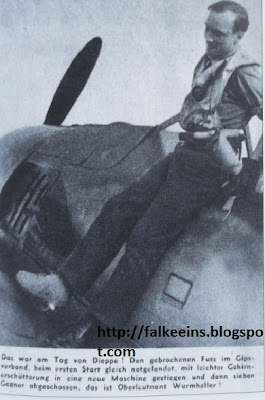 The 'emergency landing' was sustained as a result of defensive fire from a No. 88 Sq Boston (credited to Wurmheller as a Blenheim) which ditched off the coast, Fw 190 A-3 (WNr. 0130 479) suffered 65% damages. Prior to this combat Oberfeldwebel Wurmheller had downed two Spitfires for his 54th and 55th victories..

I have already blogged Volume 3 of Erik's Jagdgeschwader 2 history earlier this year, but this week is the first I've had some time to get to grips with the book. If you have any interest in Luftwaffe fighters and especially in the Fw 190 then you should seriously consider supporting Erik in his self-publishing endeavours and getting this book - even if you only buy one Luftwaffe title this year. Recommended!