Late-war Luftwaffe pilot training in the Bücker Bestmann by Karl Martin Gelbke - 'The War I Saw..' 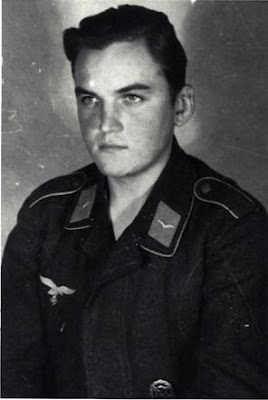 I am proud to count Karl Gelbke  and Terry Epton as regular readers of this blog. Karl has written a manuscript entitled 'THE WAR I SAW' detailing his wartime experiences and was kind enough to send through an extract for reproduction here.

I grew up in Hitler's Germany. It was under this malignant regime that I received my education, training, and basic understanding of the world. At seventeen, I became a soldier for the Reich, in the desperate closing weeks of the Second World War. Looking back on those years, I am careful not to glorify my life, my combat experiences, or the Nazi Party. Instead, I work to promote an understanding of this singularly destructive period, that created such sorrow for Europe and for my family......Karl Martin Gelbke


".....In November 1944, twelve of us left Finsterwalde by train for the A/B Pilot School #8 Pretzsch, near the Elbe River. My good friend Herbert Schreiber was with us. The school was fairly new, located on an elevation, with several brick buildings, three unpaved runways, protected by two 20 mm anti-aircraft guns. Everything was under a thick blanket of snow. The next morning, we 24 new recruits were divided into eight man teams, each team with an instructor. Our instructor was an Unteroffizier Loeffler, a highly decorated former fighter pilot, a nice guy. The rest of our first day was taken up receiving our uniform, gear, rifle, helmet and flight suit. On our second day, we took our Obedience Oath. We stood at attention in full uniform, with right hand raised. In front of our officers and an honor guard, we swore before God to obey the orders of Adolf Hitler. If necessary, we would die for him. Later that night, Herbert and I privately discussed the oath. We young volunteers would gladly put our lives on the line to defend our people and our country. But to die for one man? We were starting to have our doubts.

On our next few days of training, it was cold, with heavy snow. We were given instruction about our aircraft, and on how to survive enemy fighters in our slow, unarmed machines. To everyone's surprise and relief, we learned there would be no boot camp, and that flight training would begin at once.
Our school had several Bücker Bestmann Bu-181's, a low wing, cabin two-seater with fixed landing wheels and a 105 hp air cooled four cylinder Hirth engine. For advanced training we had a few Arado AR 96's, a low wing, cabin tandem two-seater with retractable wheels and a six cylinder, 240 hp Argus engine. We also had a couple of bi-planes on skies and a Fieseler Storch FI-156.

I remember my first engine-powered flight well. It was a cold day with clear blue skies. Seven of us were suited up, in a parachute harness, waiting our turn in a hut near the landing strip. When my turn came, I ran to the Bu-181, with Unteroffizier Loeffler on board. I hooked up my harness to the seat parachute. Loeffler told me to pay attention and to hold the controls gently. After a short run, he took off and we were airborne. We circled the airport, came in for a smooth landing, and then took off again. After landing once more, Loeffler asked: "Did you get the feel for it? The crate is all yours.!" I looked at him puzzled. He said: "Don't worry, I'm still with you."

I prepared for take off, and after a short run, the plane lifted up in the brisk wind. My first landings were bumpy. There was a big difference between this 181, with a passenger on board, and the gliders I was used to. But after a few flights I began to feel comfortable and relaxed. Soon I was flying with little help from Loeffler.
Early in December 1945, we began to hear rumors that they would be closing the flight school. We couldn't bring ourselves to believe it, so none of us took the rumors seriously. On one cold sunny day that month, when our group had returned from lunch, we watched a platoon of Volkssturm men being drilled. These were old men that the Reich had scraped together in the closing months of the war, to achieve the hopeless task of reversing the inevitable defeat. We were teenagers in uniform, watching old men in uniform, a sign that Germany was running out of soldiers. We smiled in amusement as we watched these old guys throwing themselves on the ground.

As they did so, two British fighter planes roared in, making a low level pass over our airfield. But they did not fire their guns. An hour later, our sirens sounded. Expecting a bombing attack, all our planes took off quickly for unmarked emergency strips nearby. Our trucks, scout cars and tankers sped into the nearby woods for cover. The rest of us flung ourselves into flimsy earth-dug bomb shelters. We all waited to be bombed. But nothing happened. A large formation of B-17's flew high above us, on their way to some other target.

During the next two weeks, we made rapid progress in the classroom, and in the air, despite harsh weather. We were constantly reminded that if we didn't perform as expected, the infantry was waiting for us. But we were eager to complete our training and earn our wings as fighter pilots. During this hopeless period, so close to the end of the war, German pilots were given no more than around 50 hours of flight time. This was a far cry from the training pilots had been receiving. It was no joke that these young, hastily trained pilots became known as “three day flyers,” because they usually only survived combat for a few days. Pilot training at this stage of the war was a virtual death sentence. Flying against more experienced Allied pilots Luftwaffe pilots were terribly outnumbered. Our cities were being bombed to rubble, our pilot losses kept growing. We were in great demand.

Then, on a late afternoon in mid-December, I took what proved to be my last training flight. The weather was horrible, with strong winds, low overcast and swirling snow. By now I had six hours flight time, and could master the Bestmann without help from Loeffler, who flew with me. He was always on the lookout for enemy fighters, regardless of the weather. He had good reason. As a Me 109 pilot with five confirmed kills, he was shot down during a landing approach, crashed and lost three fingers. When he recovered from his injuries, he became a flight instructor, which were in great demand. On an earlier flight I had told him how much I was enjoying my training. I recall his chilling reply  - "the only safe place for a pilot now is in a P-51 Mustang." This long range American fighter swarmed in German skies and was dominating the air war. The Luftwaffe was almost kaputt, and Loeffler understood this, even if I didn't.

After a forty-five minute flight, I landed our "Baby cradle," which is what advanced students dubbed the Bestmanns. I taxied to our wooded, concealed parking area where we were now were leaving our aircraft following our recent visit from the RAF. I switched off the ignition, and Loeffler said to me: "I hope you have enjoyed the extra time it took today. It will be over soon, anyway." I wasn't sure what he was trying to say, and I didn't ask. As the mechanic took over the plane, he told me: "Take out the parachutes, you won't need them anymore. Flying at this school is over." All training for new pilots was to be suspended at our school, and most other schools. The war was fast closing in on Germany, and we no longer had the luxury of training pilots. I knew what was coming. The fine print on my Luftwaffe application had read: "...If for any reason the training is not completed, the applicant will be transferred to the Fallschirmjäger..."
Posted by FalkeEins at 11:43